Poor infrastructure is keeping Africa’s farmers trapped in poverty. Facilitating investment into energy, irrigation, roads and storage could make all the difference, according to the latest inquiry by the All-Party Parliamentary Group (APPG) on Agriculture and Food.

As part of the research for the inquiry, the APPG travelled to Uganda earlier this year and met a group of smallholder farmers to ask them what their main challenges were. What would really help them improve their livelihoods?

“Better roads, so I can get my crops to the village collection point more easily,” said another.

The population of sub-Saharan Africa is expected to double to 2.5 billion by 2050. Achieving the Sustainable Development Goals (including the ending of poverty and hunger) will depend on small-scale farmers being able to improve their productivity and earn income from markets. This, in turn, will depend on filling the following infrastructure gaps:

In sub-Saharan Africa, around 65% of farm power currently relies on human effort. With reliable access to energy, more farmers could prepare and maintain land more efficiently, and process crops to add value. Extending the grid is unrealistic for many rural areas, but investment in small-scale solar energy holds promise. 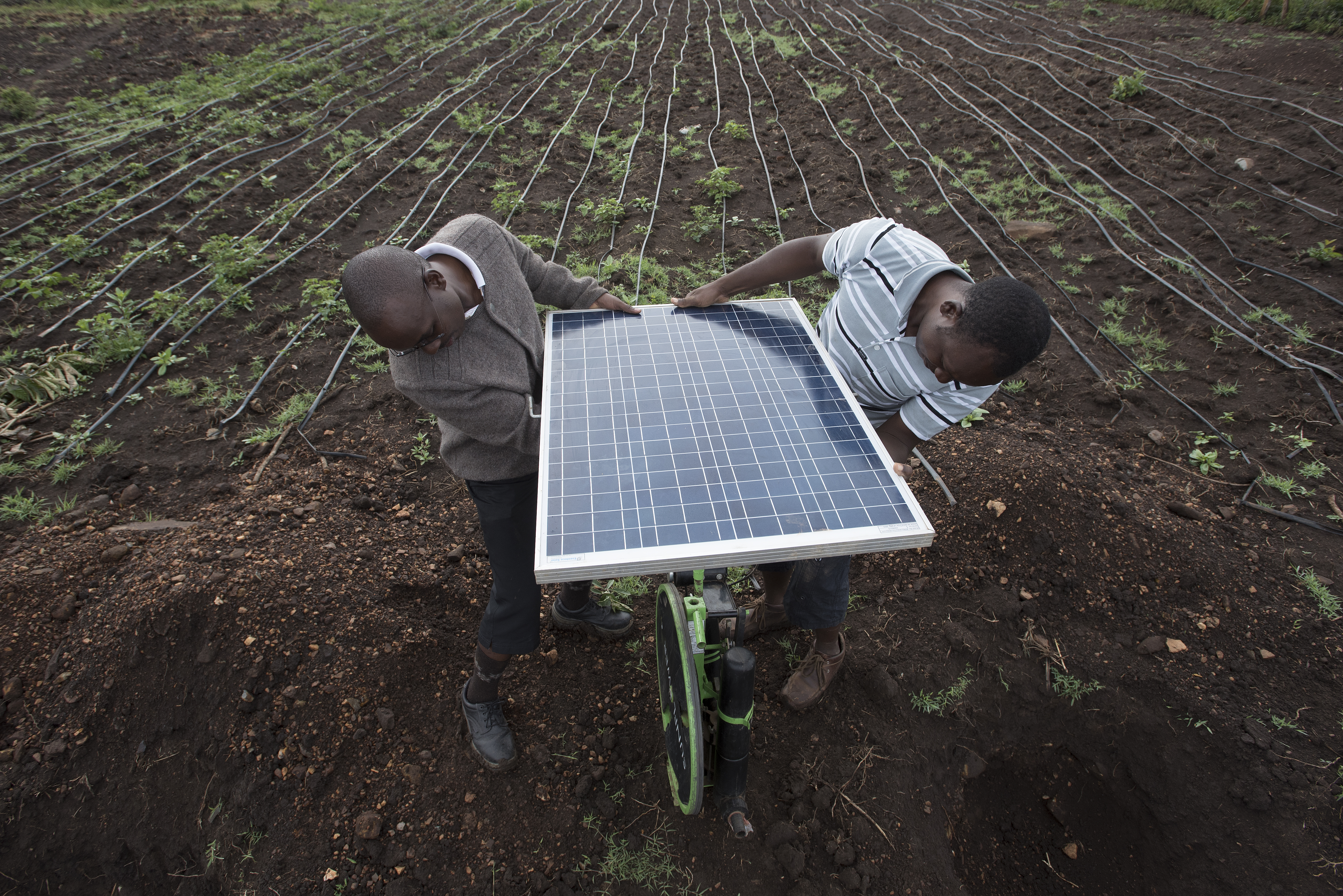 Water is obviously key to farming, but rain-fed systems still dominate. Only about 4% of arable land in sub-Saharan Africa is irrigated. Irrigation – perhaps using a $250 motorised pump – can reduce reliance on increasingly erratic rainfall patterns and enable multiple harvests each year.

The ‘first mile’ of crop movement after harvest – to reach the small or medium enterprises that buy from smallholder farmers – is typically the most difficult. Many farmers rely on bicycles or carrying goods on their heads to get to buyers.

Being forced to move small loads like this to the nearest buyer is inefficient and expensive per unit of crop, and puts farmers in a weak position when selling to passing traders.

Farmers suffer substantial crop losses as a result of poor storage (or none at all). Anything from sealable bags to metal silos or shared warehouses can keep crops from spoiling and even out supply so that farmers aren’t forced to sell at low prices. The challenge is not to drive innovation in storage technology itself, but to increase uptake. This will depend on better farmer organisation, financing and market access.

Improvements in these four areas of infrastructure need to work in tandem and reinforce each other to create a virtuous circle of incentivisation. Farmers have more incentive to invest in irrigation and energy to increase yields if they also have better physical access to markets for high-value crops.

Conversely, accessibility attracts institutional buyers, and input suppliers (for seeds, fertilisers and training) with the potential to further improve the productivity of farmers. Other services develop – roadside businesses, mobile phone providers and so on – creating a healthier rural economy.

Large-scale infrastructure projects such as major highways and vast reservoirs often capture the imagination of policymakers and look good in photos. But these large-scale approaches routinely fail to reach or benefit rural smallholders. When it comes to rural farmers, smaller is likely to be better. Research by IWMI, for example, has found that having many small-scale irrigation systems is more cost-effective than large centralised projects.

But how can such devolved infrastructure be encouraged to develop? In the case of irrigation, IWMI has recommended supporting farmer-driven investment. The problem for rural farmers is not the absence of water: it’s the absence of capital to put water to good use. The $250 motorised pump investment is still out of reach for most. The same is true of solar energy, although prices are rapidly coming down.

A recurring recommendation in the APPG’s inquiry is to address the financial barriers that prevent smallholders from investing in individual or community-level infrastructure. Rental markets, lease-to-buy arrangements, pay-as-you-go, subsidies and better use of climate funds are some of the solutions that came up during our evidence sessions.

Where these are implemented, linking them to value-chain development offers the best chance of success, and reduces the likelihood of adding to the landscape of dry ponds and rusting tractors. In Sierra Leone, for example, a Christian Aid project combined the provision of commercial cold storage for fish with linkages to institutional buyers, so that the security of a market made the investment sustainable.

The scale of the infrastructure gap in sub-Saharan Africa is daunting. But poverty is concentrated in this gap, and smallholder farmers occupy it. If we are to achieve the headline SDG goal of ending poverty, facilitating investment in rural infrastructure must be part of the mix.

Caspar van Vark co-ordinates the APPG on Agriculture and Food for Development. Caspar was formerly a freelance journalist and copywriter specialising in food, agriculture and nutrition.

The opinions represented in this blog do not necessarily reflect those of individual Malabo Montpellier Panel members and their organisations.